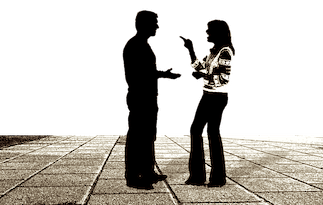 (Hint: It’s Not a Character Flaw)

Recently, I met with a couple for whom even the simplest request from one partner—for example, “Would you be sure to park your car under the oak tree?”—was interpreted as an insult or attack by Sam, the other partner.

“Don’t you think I would have thought of that on my own?” he would say.

With some digging into their personal histories, I discovered that Sam’s father had always corrected his kids by telling them they were worthless; as a result, Sam became “allergic” to any request or statement that could be interpreted as suggesting any kind of inadequacy on his part. This caused him to develop a defensive response, which, while effective in rebuffing a real attack, only serves to close down communication and invite passive-aggression in an otherwise healthy relationship.

It is an unconscious and automatic response to perceived danger, whether or not it makes sense to others.

If you know (or are in a relationship with) a defensive person, it can be extremely frustrating. You know you aren’t doing anything wrong, and yet you can’t communicate with this person without fear of triggering an aggressive reaction. It’s exhausting. In a healthy relationship, neither party should feel like they have to walk on eggshells to “keep the peace.”

Navigating this emotional minefield begins with understanding the cause of this automatic defensive response.

You might wonder why you can’t just “get over it.” Your partner might think you’re just refusing to do the work. It might appear to be a fatal character flaw, a personality disorder, or willful oppositional behavior, but in most cases, it is none of those things. It is an unconscious and automatic response to perceived danger, whether or not it makes sense to others.

Why do some people have this defensive emotional response while others don’t?

Well, as a matter of fact, we all do have it. The difference is each person’s unique biological stress set-point—the point at which your fight-or-flight stress response is activated. Think about it: What causes one person to flinch with fear causes another person to experience joy or pleasure; think about rappelling, paragliding, or getting close to wild animals.

Did you know that there are serpent handlers in West Virginia who have a tradition of handling rattlesnakes as proof of their faith and who claim to do so without fear?

On the other hand, there are people who are distressed by just a photograph of a snake and others who can’t even bear the thought of one. Each of these three groups has a different set-point for the fear of snakes.

The anatomy of defensive reactivity.

“Defensive reactivity” refers to the sensitivity or responsiveness of the brain’s defense system, especially the amygdala (our emergency response center). Situations that we have learned are threatening (or that we perceive as threatening) trigger that danger center before we’re even aware of it—it’s instinctual, not intentional—and our reaction is instant. A perceived threat increases cortisol levels, notifying the body of danger; the heart and metabolic rates go up, and the individual becomes more alert.

The good news is, defensiveness can be managed. If you are a person who has been called “highly defensive,” then consider whether there might be a grain of truth to it. Remember that this is not a character flaw; it may well be something that was once a protection for you but is no longer. Remember that we all suffer from the same human condition of imperfection, and we can change outdated behavior with intention, willingness, and skill. The following tips will actually help to heal the most sensitive people, because hearing someone else’s complaint gently means learning to manage one’s own inner critic.

1. Be aware when it happens.
Begin to notice the signs of being defensive: a tense body, self-justification, and a sense that you are being criticized or rejected.

2. Be kind when you notice the signs.
Do not criticize yourself for reacting the way you do; instead, slow things down, and try to be compassionate with yourself the way you would to a loved one feeling the same way.

3. Find a mantra that helps you stay in the right frame of mind.
I like this one: “Cultivate curiosity instead of judgment.” Another is “Cultivate inquiry instead of reactivity.”

4. Develop the skill of self-soothing.
Once you can recognize the signs of becoming defensive, learn to do something to change it, such as deep breathing or a simple stretch. Acknowledging what is happening (“I’m becoming defensive, and I want to take a moment to calm myself so I can hear what you are saying”) provides time and space—and often, compassion—for you and the other person.

Often, the people who have the hardest time acknowledging their part in situations carry around the harshest inner critic. But to love ourselves doesn’t mean that we’re above criticism. It means that we hold a deep conviction of our own worthiness and our right to be treated with care and respect. If you are a person who is overly defensive, don’t make it something to criticize yourself for. Reframe it as your human struggle, which we each have, and one that you can change.