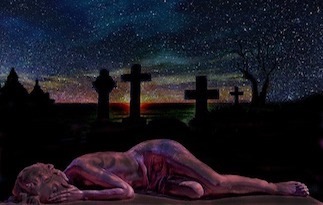 “Remember that there is no magic wand that can take away the pain and grief. The best any of us can do is to be there and be supportive.” ~Marilyn Mendoza

My mother, an articulate and highly accomplished writer, began to lose much of what she valued a few years ago. Her eyesight was compromised by macular degeneration, her hallmark youthful vigor was replaced with exhaustion, and many of her friends began to die. Finally, and cruelest of all, her memory began to go, slowly at first, and then with increasing speed.

Her struggle and her suffering in the last two years of life were excruciating to watch, and I was helpless to stop what felt like an avalanche of cruel losses.

Sometimes in that last year, she would call me several times a day with distress and confusion. When she finally died, after five ambulance trips to the hospital in six weeks, my first response was thankfulness that she was out of the struggle and, to my surprise, relief. I had been grieving the mother I had known for the last year of her life, and she had already been gone a long time.

It would be another month before I found my grief, and I suspect that it will be there forever; but my immediate feeling was not sadness.

People feel so many things at so many different times about the death of a loved one: loss, anger, devastation, confusion, guilt, and fear, to name a few. If we assume anything about how they are experiencing their loss, we can make them feel worse. Here are a few suggestions about how to reach out, starting with what not to do.

Don’t assume you know what I am going through.

I was surprised by how many people came up to me and said, “I know just what you’re going through.” Even worse, they would tell me, “This will be the saddest thing that will ever happen to you,” or “You won’t know who you are for years after this.”

We all know that losing a mother is a major life event and it changes many things. What we don’t know is how. It is different for each person; we cannot overlay our own experience on someone else’s and assume it’s the same. For me, whose first feelings were that her death was that of a reprieve, it caused me to doubt the validity of my response.

Don’t use religious clichés about this life or another.

Religious clichés such as “Jesus called her home,” “God needed another angel,” or “it’s in the hands of the Lord,” were infuriating. For one thing, my mother was not a Christian, nor am I. I love the Jesus story, but it doesn’t resonate for me as the only true story, and it sure doesn’t help me feel better about my mothers’ death.

Don’t say “there is a reason for everything.”

Then the cards began to come filled with familiar clichés: the worst was “there is a reason for everything.”

That feels to me like a way to do a “wrap up” on something that is fragile, personal, and unknown. How do you know there is “a reason for everything?” It insults grief by trying to dilute it into a rational cosmic plan.

You cannot explain, rationalize, or sum up my loss in a tidy little cliché. My reaction to those messages was not to feel more comforted, but to feel more isolated.

Don’t talk about her “passing.”

Talking about people who have “passed” feels like minimizing what happened and avoiding the word “death.” It is a tough word, it is final and irreversible and filled with loss. But it is a true word. It is what we have to manage, and the hugeness of the word, death, in its finality and brutality is what allows us to find our necessary grief.

There were people who said things that did comfort me.

Here is the most important thing for you to know.

Each of our relationships has a bubble around it. Within that bubble is the history of what we have shared. Grief is a part of the human experience, and we grieve not just for the person who has died, but also for the part of our history they take with them.

Losing a mother is a major life change regardless of what the relationship was like. But we don’t know what that is like for anyone but ourselves. When we assume we do, we belittle their experience and lose a chance to know them better.

Although we may intend to connect with the other person, sometimes the opposite happens and what we say makes them feel worse. When we invite them to share their own experience, we help to break down the isolating walls of loss and inspire a true connection.